On Thursday January 17, the European project Engage led by PEN Català will be participating in a meeting to evaluate the projects that promote participation and access to  European literary culture organised by SILO (Socially Inclusive Literature Operations). The meeting is in the Serbian city of Belgrade at the Krokodil Contemporary Literature Serbian Center, who lead on the most important literary festivals in the city. During the meeting, participants will share their experience from the last year in which they have experimented with several formats with the aim of reaching groups excluded through their activities (from creative writing workshops with patients with cancer in hospitals, to literary readings with prisoners through video conference). Some of the results are already available on the SILO website.

Nahide Arabadji of the cultural centre Det Fria Ordets Hus in Växjö (Sweden), and a partner of Engage, will participate in the meeting to present the state of the activities of the Engage project among which is the European platform of case studies with young people in the field of literature.

The meeting will also serve to conclude the exchange between Engage and the Serbian association Krokrodil which has already participated in a seminar of librarians organised in Växjö last May. 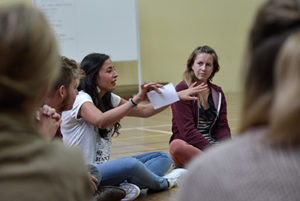