“It was extremely surprising. I have never experienced such good partners, thematic… everything was extremely useful and helpful”, Tina Popovič, Ljubljana UNESCO City of Literature (Slovenia)

“This workshop was designed to challenge us to look at literature broadly, in different formats. We will take the inspiration from other organisations, because the way they work and the way they capture young audiences is quite interesting. I will definitely share the notes I took with my colleagues in South Africa”. Tebogo Mzizi, Durban City of Literature (South Africa)

Tina Popovič and Tebogo Mzizi were two of the participants of the International Workshop on young audience development, that took place in Krakow (Poland) on 8th June. The Workshop, organised by PEN Català in collaboration with the Krakow Festival Office, is one of the activities included in the European project Engage! that seeks to promote the access and participation of young people, especially teenagers, in cultural and literary activities. Supported by the European Union, the project gathered together more than fifty cultural managers and representatives of several UNESCO Cities of Literature.

The participants had the opportunity to listen and interact with some enlightening literature advocates, such as Milena Beric, winner of the 2016 European Communication Award for her work at Krokodil Festival (Belgrade, Serbia). She offered an interactive session on Creativity in Communications, where participants could exchange their communication strategies and talk about how they target young people. Tebogo Mzizi, from the Durban City of Literature (South Africa), found the presentation particularly interesting and challenging because “it makes one think that what we do is not about us, it is about the audience”. She pointed out that the sessions were fulfilling because they were not only theoretical, but also practical, so the attendees had to participate in what was being explained.

Helena Bijnens and Staf Pelckmans, leaders of the European project SILO, held the session “How Participatory is your Literature Event” where attendees could critically review each-other’s practices on audience development and discuss the concept of participation.

The workshop concluded with the roundtable “Learn from the Best Practices”.  The session was conducted by Gemma Rodríguez from PEN Català, leader of the Engage! project, and Pepe Zapata, an expert consultant on audience development. They introduced the call for participants that has been launched by Engage! to collect best practices on young audience development in the literary sector. So far, more than 50 projects from all over Europe have been submitted and 50 more have been researched by the organisers. All these projects will be part of the Engage! digital platform on best practices, to be published soon. A group of selected cases will be analysed in depth and will be part of a catalogue of best projects. The database will also serve as a place to search for European partners working on projects related to young people. During the roundtable, the attendees had the opportunity to get to know three of these case studies.

Emma Gould, from Roundhouse (London, UK), presented the organisations work with young people and the guide: Guided By Young Voices: How to include young people on your board and in your decision making processes.

Jesús Sanz, a secondary school teacher of Spanish literature at Institut del Teatre (the Performing Arts School of Barcelona), explained the purpose of the project First Literary Dates – a project created by Rosalía Delgado, in which teenage students take part in blind dates with other students who read the same books.

Finally, one of the young members of Scomodo explained the origin of the Italian cultural magazine aimed at, and led by, young people. 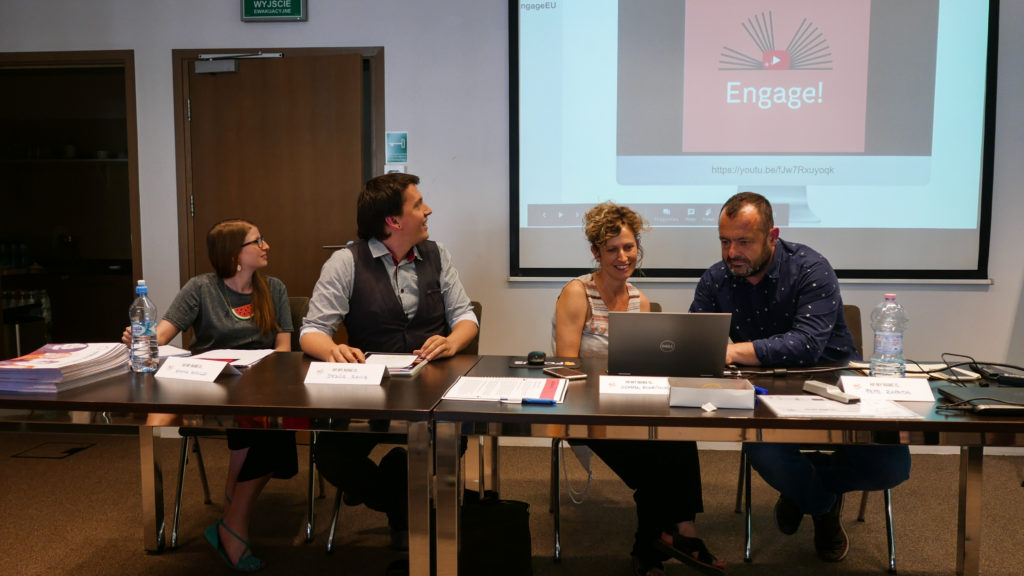 Gemma Rodríguez, from PEN Català, presenting some of the best practices analysed by Engage!

To conclude, Gemma Rodríguez, from PEN Català, encouraged the representatives of the UNESCO Cities of Literatures to join the project Engage!, in order to create a network of literary organisations wanting to develop participation strategies for young audiences, like Tina Poporič states: “sometimes, things are going on locally, but they can also be useful on the other side of the world”. This is a real need for these institutions: “hopefully we will stay in touch with the other participants”, said Nicky Page, from the Dunedin City of Literature. As Manfred Metzner (Heidelberg City of Literature) said, we need to work together for the younger generation: “I think this is the most important thing we can do in our daily work in our towns and our countries. I think they need all the support we can give them”.

Do you love literature?