Libraries with music, videogames, concerts, night-time games and workshops with youtubers. These are some of the proposals by the Punkt127, Club Dynamo and Stockholm Kulturhuset libraries.

In early May, three Catalan librarians, at the invitation of the Catalan PEN centre, participated in an exchange in Sweden where they learnt about some of the Nordic libraries who have specialised in youth audiences. The exchange took place within the framework of the European project Engage!.

Sometimes it is better to focus on a specific set of objectives instead of attempting to be everything to everyone.  This is the recommendation of Punkt 127, a small library which overcame a bad reputation for arguments amongst its users with differing needs and expectations.  The solution was found through separating the library users and becoming a children’s and young people‘s library, where they feel listened to and respected. 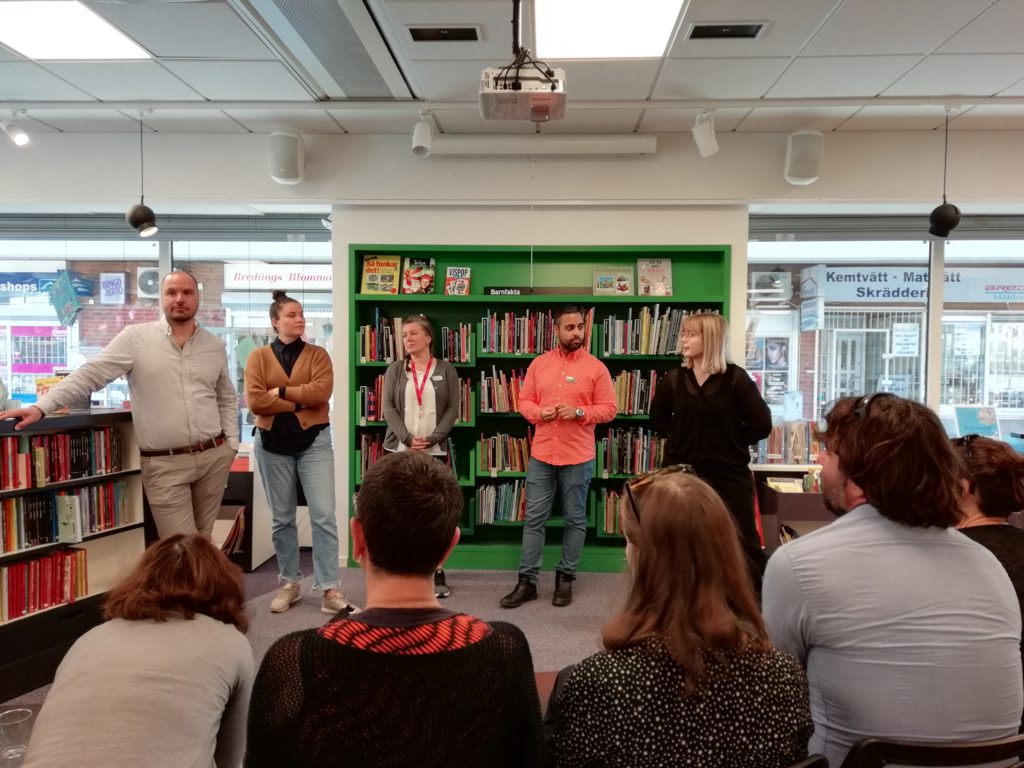 Punkt 127 is a  library for teenagers in Stockholm.

Adults continue to use the library, however they are aware that at Punkt 127 the rules are different, as is the level of background noise. The library organises a variety of activities to attract young people, but it is the profile of the librarians which has been key to its success: they have understood how to connect with young people and establish relationships of trust which often extends to their family environment.

In spite of the fact that colleagues often reproach them for having turned Punkt 127 into a youth club, the librarians defend the fact that a library for children and young people does not need to have the same characteristics as one for adults and that the work they undertake with these youngsters helps them to become better librarians. Punkt 127 has become a point of reference and a model of co-existence, with some surprising figures: last year it had over 100,000 visitors. 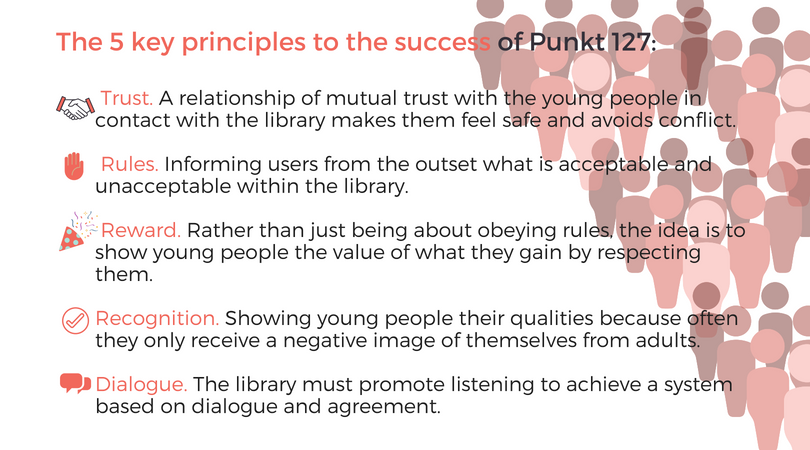 Dynamo is the youth section of the Göteborg Central Library, for 13 to 25-year olds, where the staff are not formed purely by librarians. Thus, they can run a variety of activities such as sessions on videogames, like FIFA.  It has proved very effective: in the past scarcely any young people went to this library, however they have now managed to make them regular patrons. The Dynamo staff recognise that the majority are there to play games, but this is a long-term strategy. They want adolescents to get used to coming here so that, later down the line, when they recommend a book to them, they are more inclined to take it up.

They also set up Club Dynamo, which organises concerts, theatre sessions, night-time games, dances, workshops, poetry readings and crafts, amongst other things. They encourage young people to organise activities themselves. They tell the story of one of their users, a timid young boy who suggested organising a forum on one of his hobbies, Pokémon Go. The librarians agreed, however they requested that he took charge, as he was the expert in the game.The activity was a resounding success and attracted girls and boys from all over the city. If the library positions itself as a space associated with games and creativity, young people feel more inclined to go there.

Kulturhuset is a large cultural centre in the centre of Stockholm. The building comprises theatres, exhibition spaces, cafés and three libraries, divided by age groups. The Rum för Barn is the children’s library, designed for children from 0 to 10 years of age; the Tio Tretton is the library for those aged between 11 and 13 and, when they turn 14, young people have use of Lava: a library with the feel of a lounge bar designed for young people between the ages of 14 and 25. 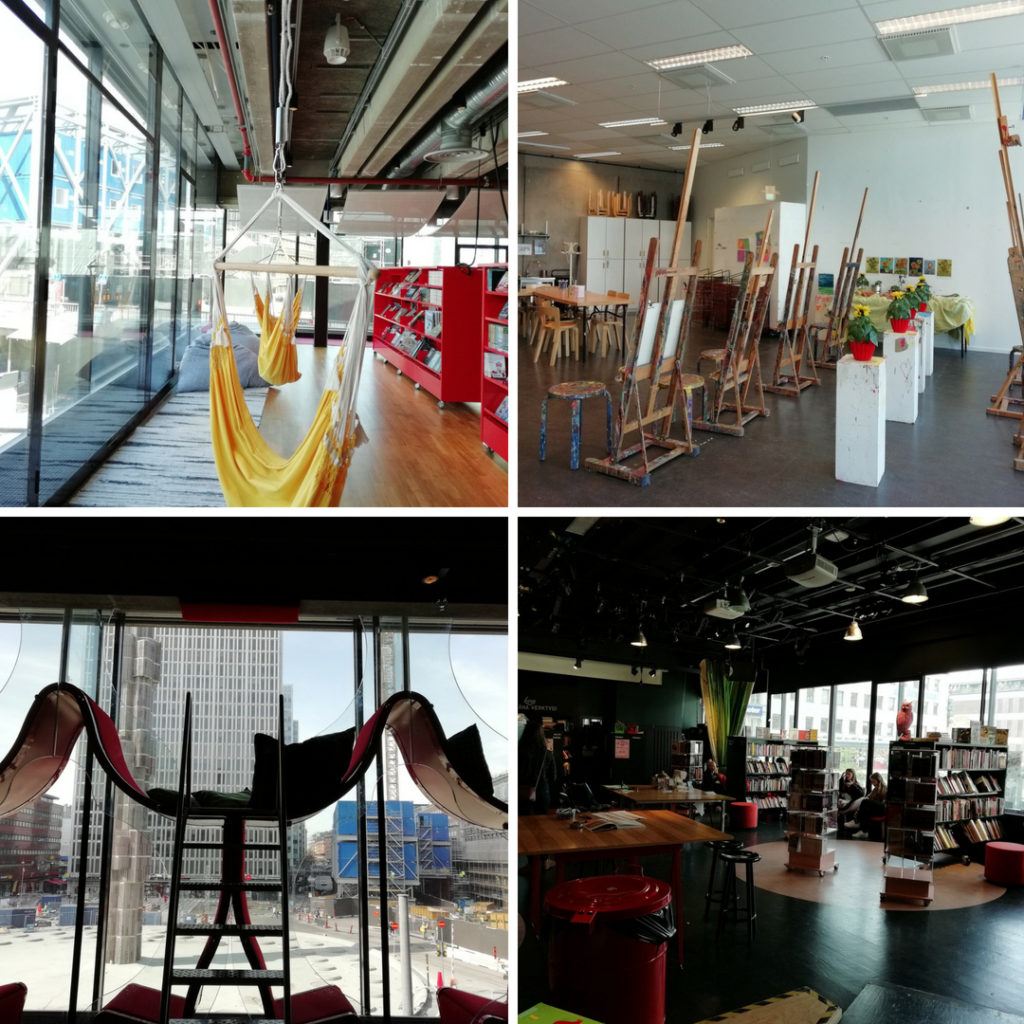 Lava is the library for 13-25th year-olds in the Kulturhuset (Stokholm). It is furnished according to the needs of these users.

The most surprising aspect of Kulturhuset is the division of its users, which is based on the age groups to which books are aimed, and the way in which the design of the space is adapted to those using it. They are not conventional libraries, rather, they are conceived as creative spaces.  There are hammocks, a kitchen, play corners, print materials, sewing machines, easels and paintbrushes, all sorts of tools… In the area for the oldest age group, they even play music: something which breaks with the traditional concept of libraries.

They explain that the different elements which make up the libraries have been introduced as a result of suggestions by the young people themselves, so that they feel comfortable there. They aspire to the idea that the library needs to be much more than a place to consume culture: it must be a place to stimulate and generate culture. Once again, the importance of understanding this audience and making them the protagonists of the spaces and activities allows young people to feel much closer to, and connected with, the library.